Storyboard is the sequence of drawings, serving as an object lesson of the future cartoon, so to say its paper version. It helps the director to plan the scenes of the future movie or clip to the last detail beforehand.

As it is known, a movie or a cartoon consists of separate plans – close, general, middle, distant, etc. So, in the storyboard each future plan is substituted by one or several (to show the motion of the camera) drawings. At first the director draws with the help of simple shapes – the drawings in “dot, dot coma dash…” style, and then the artists create the storyboard of the future movie.

On this stage it is important to see the integrity of the movie, to check if everything is reasoned, if the dynamics isn’t lost, if the plotlines are worked out, etc.

We have developed our own form for the plans, A6 sized each. During the whole stage of working at storyboard we have printed more than 1000 of such forms. 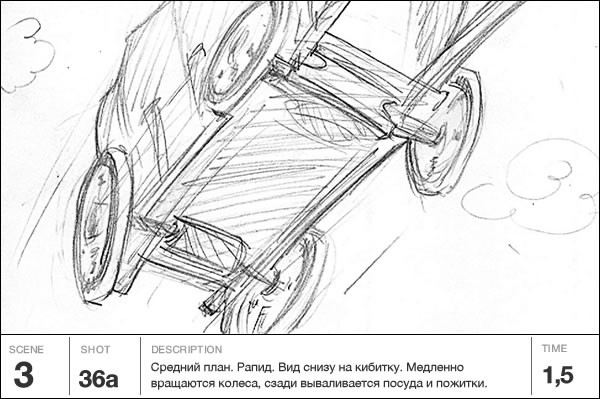 Scene – Number of a scene. Scene – is a piece of film, conjoint by the place or action. For example “night’s lodging in the forest.”

Shot – Number of a plan. After the approval of the storyboard all the plans are numbered. The letter “a” means that in this plan we see the beginning of the motion and that there is another plan with letter “b” where the motion will be continued.

Description – The description of a plan. Here the director fills in everything that happens in the current plan. The size and musical effects are also specified here.

Time – The approximate duration of a plan. It is indicated in seconds.