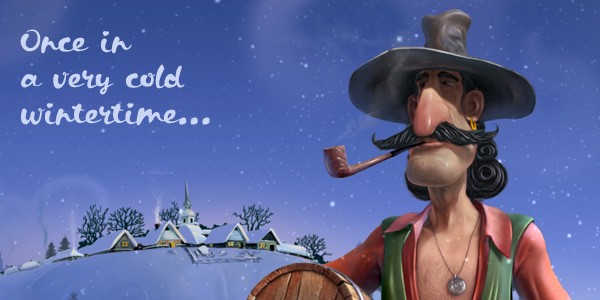 Firstly, we decided to act like all progressive internet communities.

Firstly, we decided to act like all progressive internet communities.
Namely- to steal a post card from internet, write “Happy New Year to everybody!” and think that everything is ok.

Then, the claims about the text appeared.
It was suggested
“With New Year of bull”
“New Year 2009”
“Your health”
“Dima, take a quick ride and buy vodka, champagne and salad”
“Please, don’t turn off the gas”

Then the claims appeared to the post card itself.
In spite of the protests of the painters, it was decided to draw Gojo with a Christmas tree, with Santa Claus and Snegurocika.

After that we remembered that this is an animated project and under sorrowful moans of animators and painters, we decided to draw postcard with elements of 3D animation.
After that in order not to offend our 3D designers it was decided to draw the postcard fully in 3D.
Let’s paint the town red!
We decided to play big and make it with the sound from Zdob si Zdub band and vocalism of Roman Iagupov.

We almost did it, but perfidiously the holidays came. We have a tradition- every year, on 31-st of December, my friends and I, start to forget everything till the end of the holidays.

And, when the memory turned back, we decided- Why on the earth it is only New Year? For what such narrow bounds? We will have a lot of holidays. That is why we finally went demented and invented a postcard, in which everyone can congratulate with anything. Not only to congratulate, you can simply inform somebody of something.

The cartoon will still be!
Darling, I’ll be late.
I met your mum.
I’ll be busy on 14-th of February.
Alex lets go for a beer.
The holiday will take place!
Be strong!
Oh my!

You can try it at this address