As we promised, today we’ll tell you how our Ilo learned to make first steps and what came out of it….

So, the model of the turkey is ready. It’s the right time for our hero to shake his wings and step towards adventure. Only one thing is left to do- to make the skeleton and cover our birdie with feathers.

We’ll certainly start from the skeleton and rig.

The rig set-up went according to plan until we got to the wings.

Yeahhh….for a gourmand rigger the wings are probably the most delicious part of the bird. There is little meat here, but maaany feathers.

Of course, we couldn’t do without some culinary experiments.

The first variant of the wing turned out to be quite fleshy ( some of the guys must have been pretty hungry), but at the same time they looked a lot like hands which could catch hold of anything and even play cards. As a basis we decided to take the model of the wing from the cartoon Valiant. Well, it looked quite good except for one problem. The wing couldn’t be folded as birds do it. The wing construction didn’t allow it.

Well, after discussing things we decided to make a symbiosis between a real wing which is not intended to hold anything and a human hand.

It didn’t take us a lot of time to do it, the only thing which is worth paying attention to is procedural animation. A part of wings was animated manually, the rest was animated automatically according to definite connections. 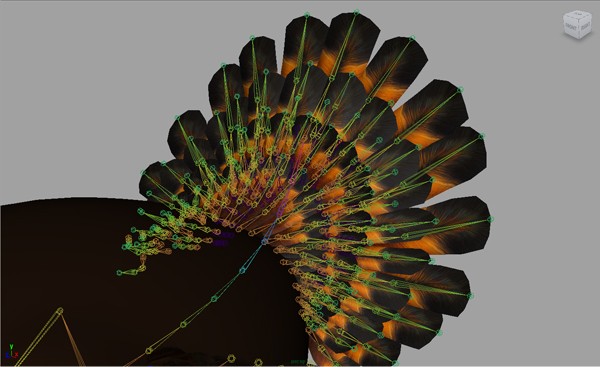 In addition to that some settings were created that allowed to fold and fluff out the tail in a certain manner. That simplified animation and helped to add some liveliness to our character.

Three heads are better than one.

In the course of work the head of our Ilo was a little bit modified.

The only problem on this stage was presented by the eyes as everything should work in them: both eyelids and pupil plus extension and compression of the whole eye. Even its tuft had to be made in such a way that the animator could shape it properly.

The whole head rig consisted of two control types: the first one on the basis of blendshapes and the second one which consisted of bones. Due to these types it was possible to get practically any emotion or head shape. It was possible to change the proportions of the beak, snood length, eye shape, pupil size and so on. In short, we could take the turkey into pieces.

After all this it was decided to do the last test animation to check working capacity of the rig and to understand in general if we succeeded to make the turkey or not.

In the process of animation some minor defects became apparent which we had to clear later. For example, it turned out that inverse kinematics of the wings system worked wrong because of the hierarchy disorder in the process of earlier alterations. It also turned out that the turkey’s snood had insufficient control which also had to
be improved. We made a system of two types of snood animation, the first one was dynamic, the second one purely manual, it was possible to blend them and switch to one of them which was quite comfortable in certain situations. In other words the snood was animated automatically with the possibility of its editing in definite places.

So, the wings are ready, the tail moves. The only thing we have to do is to add feathering.

The elaboration of turkey feathers turned out to be another interesting task.

What do we need from our feathers?

In the first place, we need to place correctly a great amount of feathers on the wing without working manually. As everybody knows, laziness drives all progress. That’s why it was decided to do it with the help of scripts. In addition to that it was necessary to create a control system for all this stuff regulating all feathers at once or different parts, and if it’s needed each feather separately (automatics doesn’t always work the way we need).

So we take the rigged turkey. Its rig includes flight feathers which are controlled manually. According to joint location an additional surface is created procedurally which deforms automatically after the skeleton building the wing. Exactly onto this surface secondary feathers of our turkey are attached, the position of which depends on the deformation level of the surface itself.

The next task was creating the possibility of feather manual editing. We decided to create a multilevel system, where the animator had the access to feathers starting from general feathering and ending with nearly each separate feather. Depending on the plan complexity the animator has to choose by himself which level to delve into.

Essentially feather control can be divided into 3 levels:

Feathers are conveniently represented as curves ( for production speed-up), which are later transformed into plates with pulled textures.

So everything seems checked and tested. In one pot we throw the final mesh of the turkey together with the final rig, mix with the system of feather control, sprinkle densely with spices in the form of scripts and vuala!

Creaking and grating Maya digests all the contents of the scene. In principle everything works, but not so fast as in tests on separate elements.

Why not to animate the separate parts then?

“Divide and rule!”- as one wiser said. At first we animate the turkey, then we insert our feathers in layers one feather after another, turn on dynamics in the end where it’s necessary and that’s all! Done! Ugh! Now we can stop to smoke. 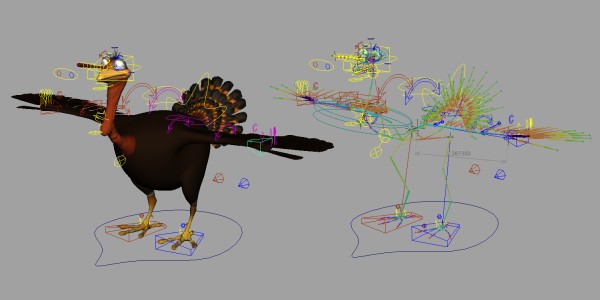 The turkey as expected became the most difficult character, but we can say with certainty that now we can easily make any kind of bird.