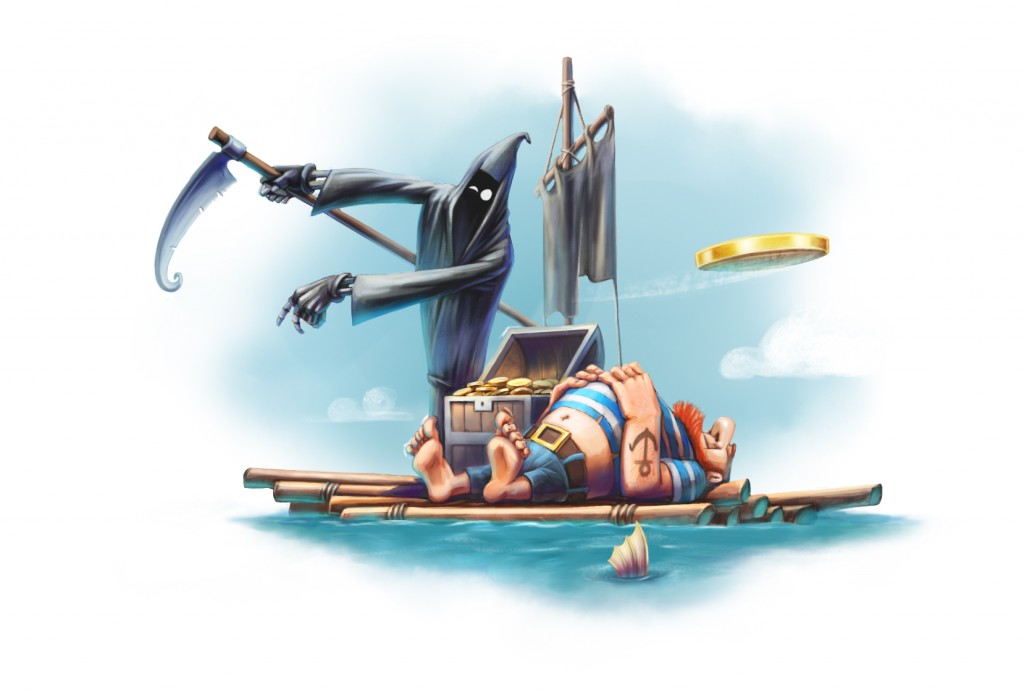 Well, you can’t just breathe a sigh of relief when you finish a project. Especially if you work in an animation studio. As soon as we finished the first animated film, we immediately started working on the second one. But we had to start it from scratch.

At first, we had to find the right setting that would make it clear that death should appear right there and then. So, we chose the ocean after a shipwreck as the setting. As our Dji can’t swim yet, he walks on water.

We drew inspiration from movies, videos, books on the history of pirates. The preparation was very extensive.

So, we have an ocean, a small raft floating amid the wreckage, a pirate dying of thirst (there must have been at least one survivor) and a chest of gold, which is completely useless in the present circumstances.

And here we come.

The first problem. Where should we set the camera? Give us at least one landmark! The only guiding marks that we could use were the sun and objects floating in the water. But while working on the storyboard, we faced another problem – how to create the correct movement of the camera in the shot with Dji running on the water so as not to disorientate the viewers? We changed the shot thousands of times, but finally we chose the variant that worked best for us.

Our Dji is endowed with a charismatic character. He is excessively curious, absolutely naive and clumsy. Well, it can’t be helped. Perhaps, he was born on an unlucky day. As you can see, Dji is the complete antithesis of the ugly old woman with a scythe. There is nothing special about it except one thing. These character traits prevent him from doing his job. So, Dji is a failure, a loser, an unlucky fellow. Well, it happens. We feel sorry for him, but he has only himself to thank for it…

By the way, the model of Dji hasn’t undergone any changes. We told you about it last time. 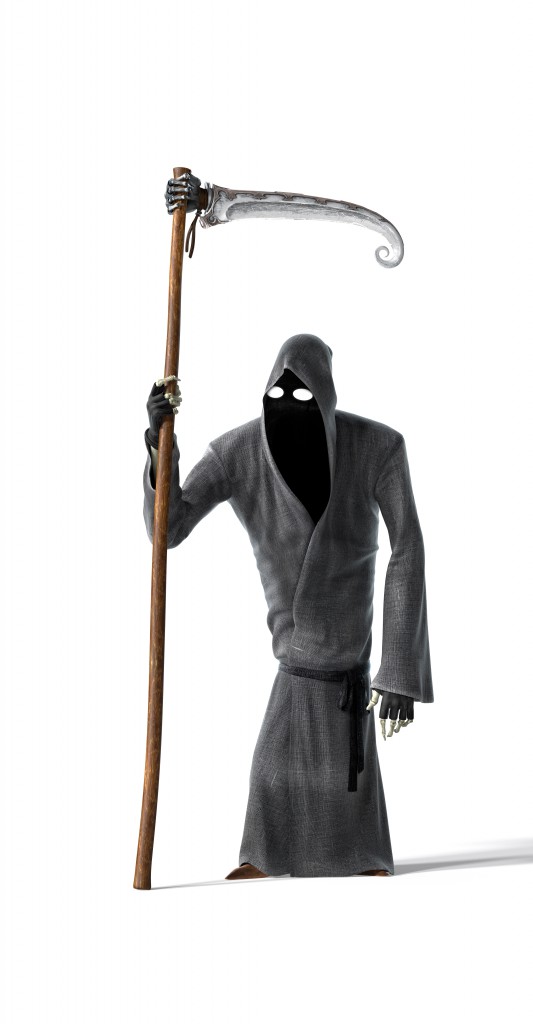 So, the model of Dji was ready. As for the pirate, we had to create a new character from scratch. None of us had ever met a real pirate and at the same time we didn’t want him to look like any well-known pirate (like Jack Sparrow). We tried to find a reference in books. But pirates portrayed in books wear hats, frock coats and sometimes wigs. We didn’t want our pirate to look like that. So, we started searching.

As for the body, the variant that was approved by the whole team was found quite quickly. Our pirate is a thick man who has strong arms and for some reason not very strong legs. But we like this testosterone donor. We even drew a tattoo for him. After we finished the body, we started drawing his face, but it turned out to be quite problematic to choose the right variant. 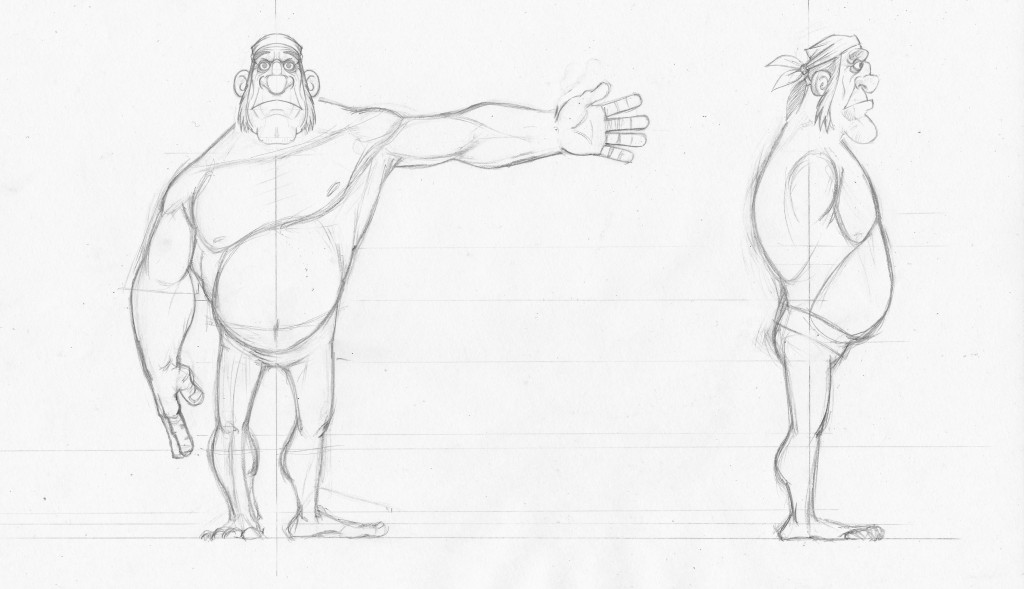 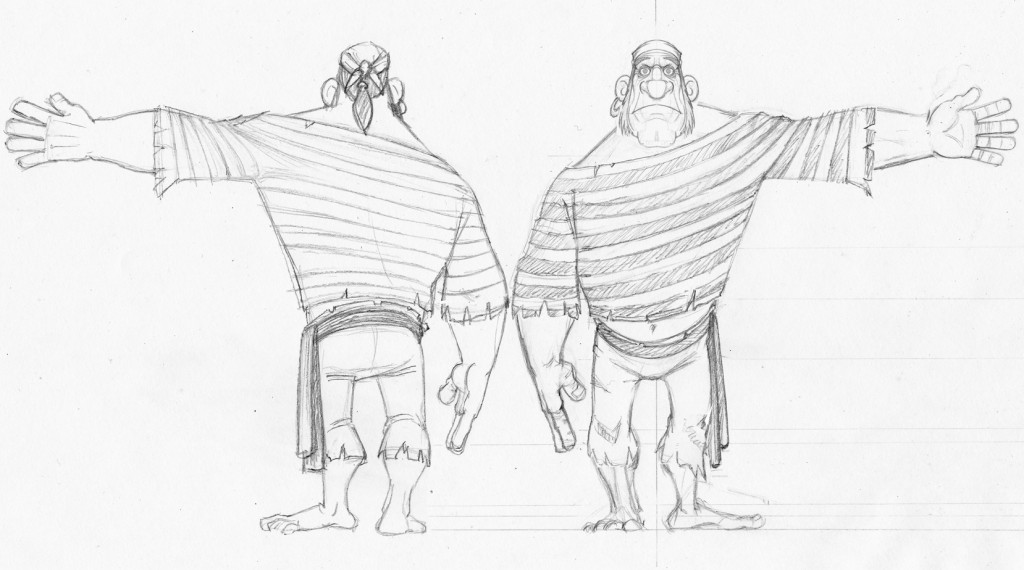 So, what kind of face should a pirate have? Well, if he is a pirate who survived a shipwreck, he must be harsh, tough and fearless. In other words, nothing can scare or harm him.

We had about 10-12 variants of the pirate’s face. But none of them were good enough. He either looked vicious or too feeble. Eventually, we made him look like a red-haired skipper. Now he is really cute! 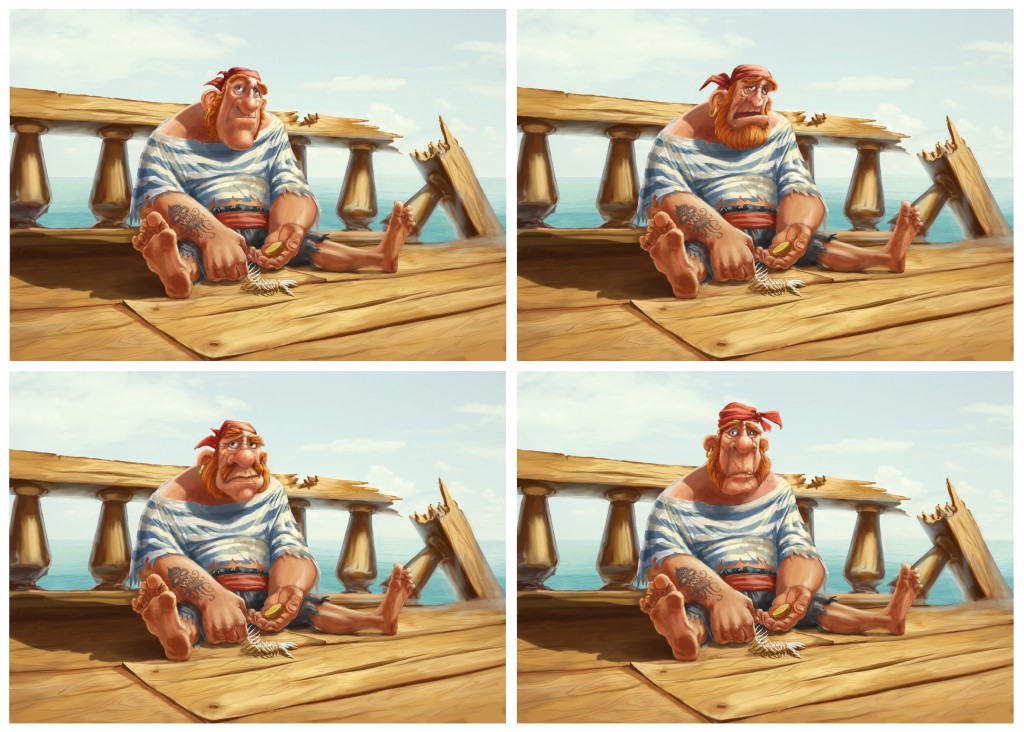 After we approved the face, we had to work on his beard and the hump on his nose. And again, we had lots of variants.

Here are the humps: 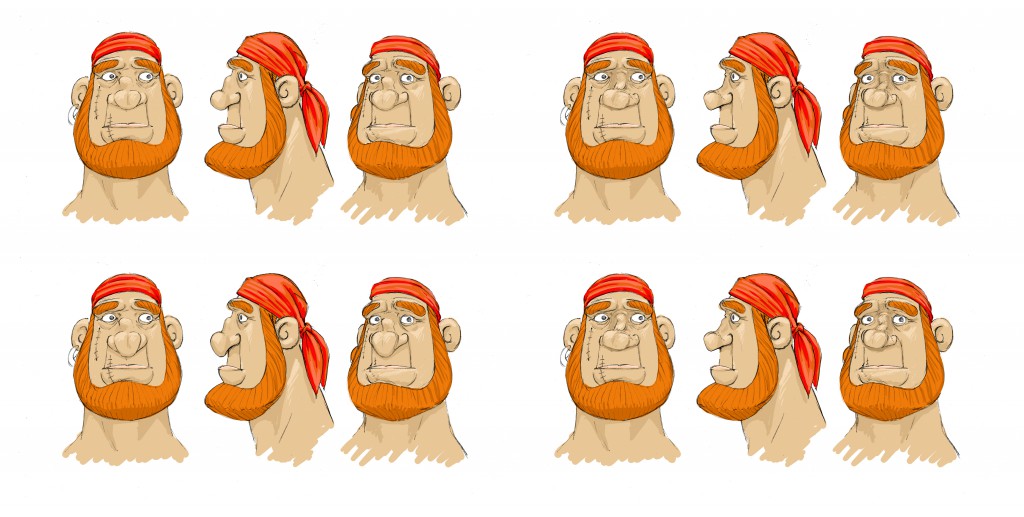 So, meet our Sam. Like all pirates (we love stereotypes), he likes to drink and he is extremely greedy. He survived a shipwreck, but instead of taking water bottles, he saved a chest of gold. Well, Sam is not very smart, but he never lacks strength.

In the end Sam will show his wits and cunning, but we’ll talk about it later.

The big fish is one of the main characters of the film. We decided that it would be a bottom-dwelling fish. Its real prototype in the underwater world is the mudskipper. But it is too small for our venture.

So, we drew 25 variants and finally managed to choose the one we liked. After that, we inflated it and made something between a whale and a stonefish.

Our fish is named Fish (a popular name in fish community). It’s a lazy silent plotter, waiting for the right moment to catch its prey. It lures the victim with its fin, pretending to be a small fish. 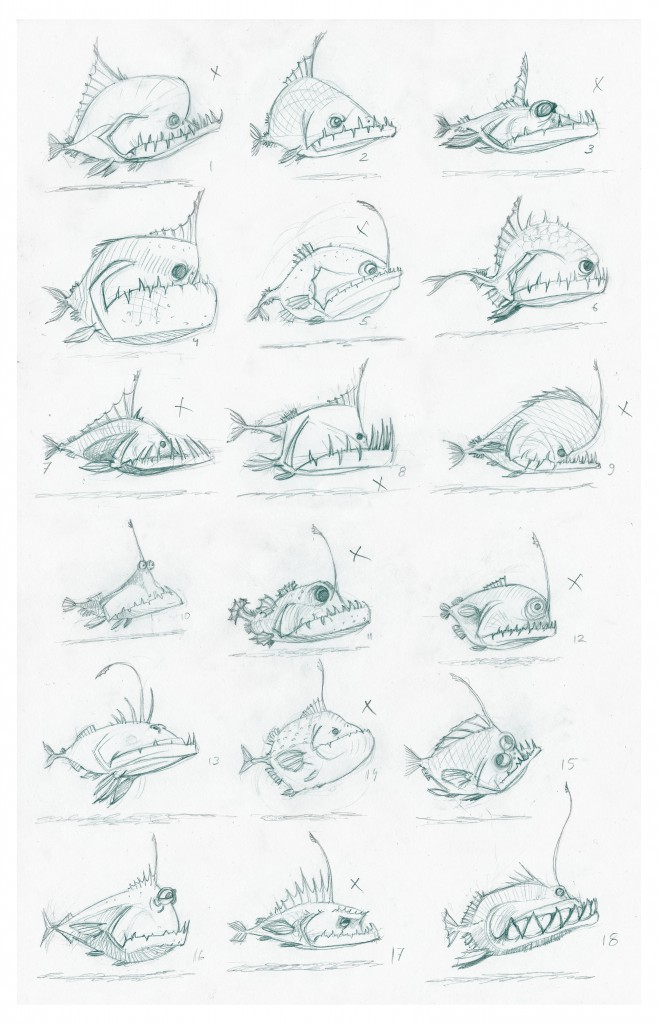 We had to choose between these two variants. 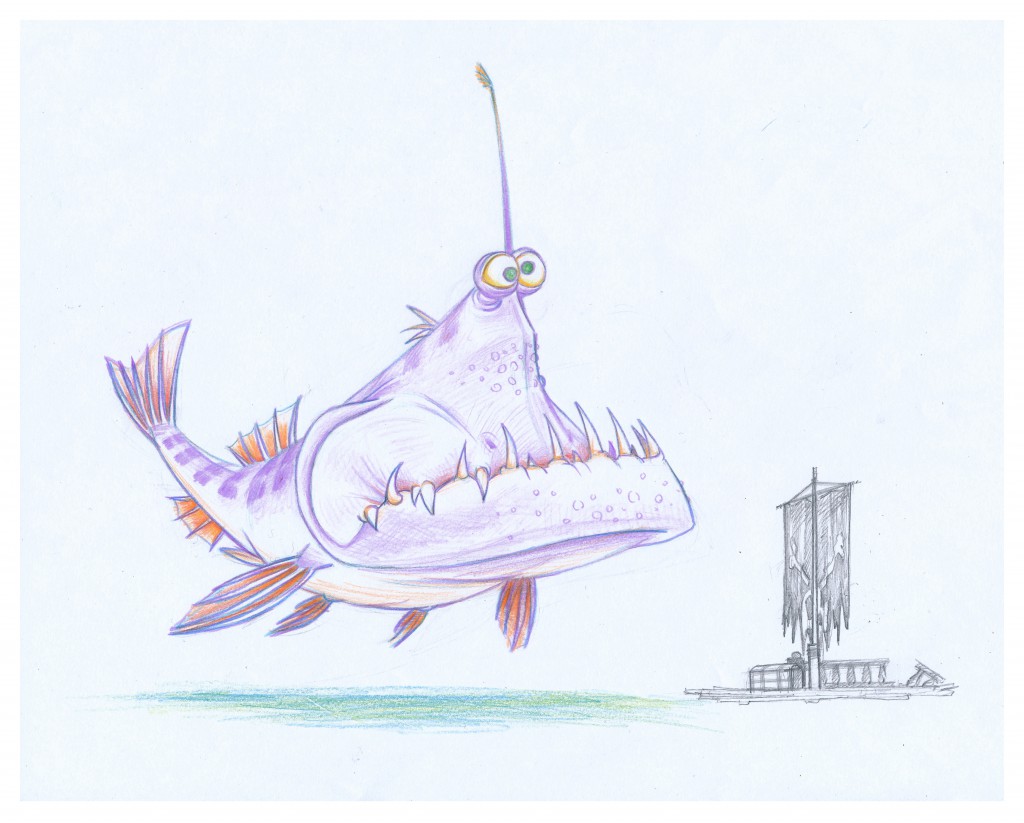 Eventually, we chose this fish:

After approving the model, we delved into the process of color search: 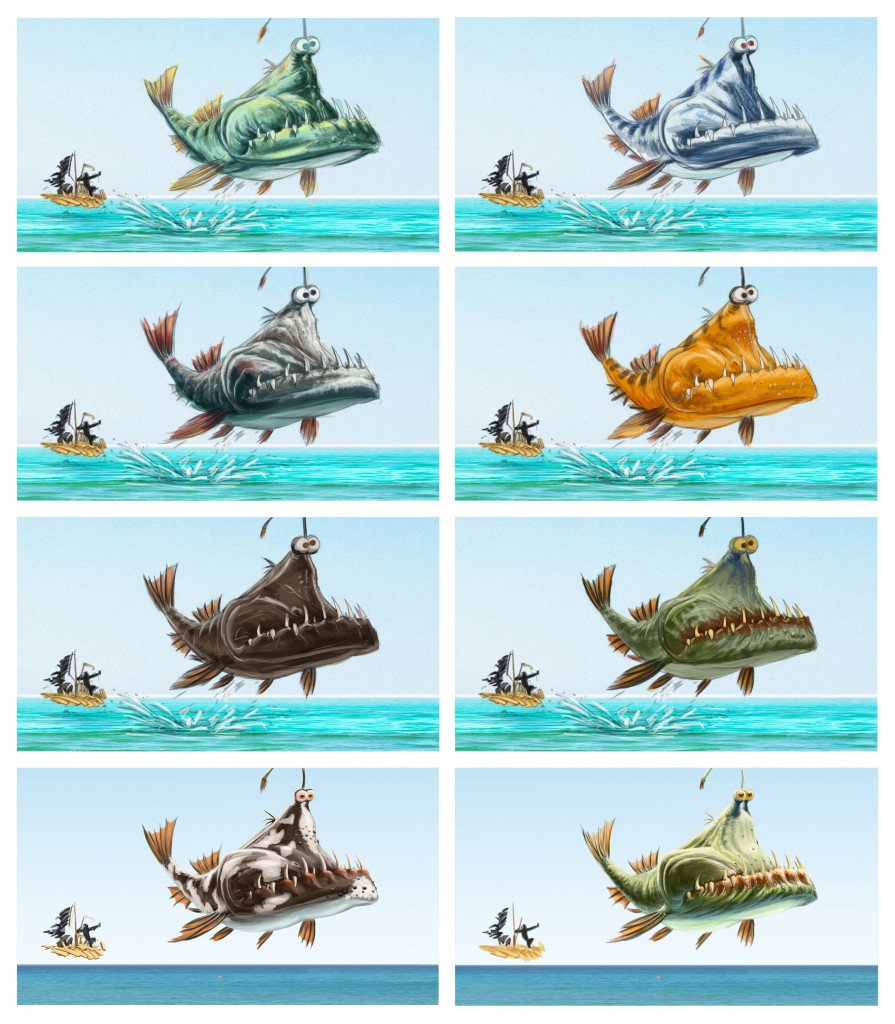 We selected this variant: 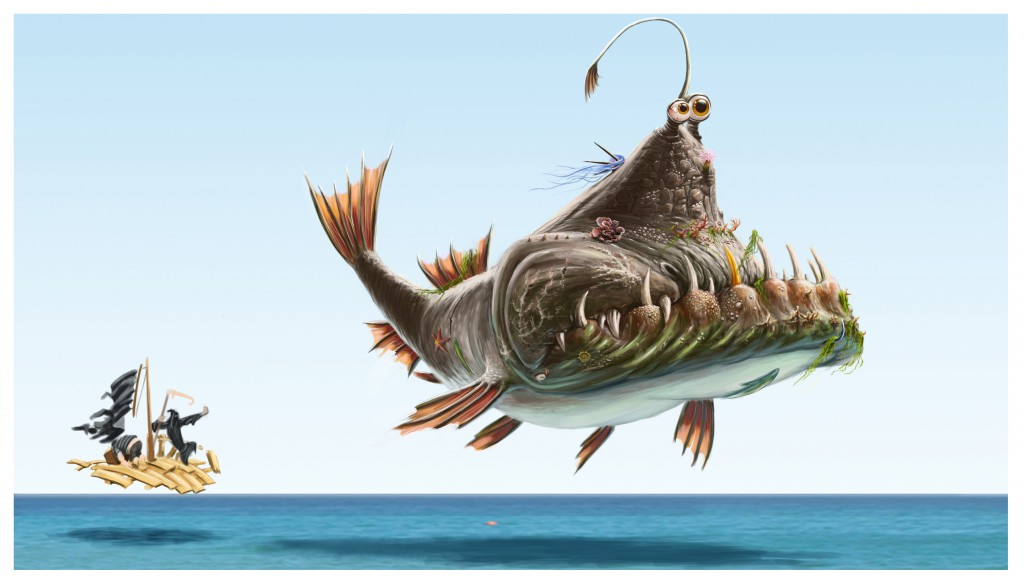 And here’s the final 3D model of the fish:

We had one more character, which, unfortunately, wasn’t included in the animated film. It’s a small fish. We’ll tell you later why it wasn’t included, but now a few words about the fish itself. Its prototype is the telescope fish with big eyes.

So, we created a small fish that was quite cute, funny and silly. It wasn’t totally perfect as its left hemisphere didn’t coordinate with the right one, so the fish could rotate its eyes in different directions like a chameleon.

We didn’t include it in the film, because we had some problems with compositing that we couldn’t solve, so we just changed the script a bit and voila!

But according to the official version, the fish was excluded, because of its crazy rider requests and the fact that it demanded a higher fee, although we made an agreement “on the shore”:) 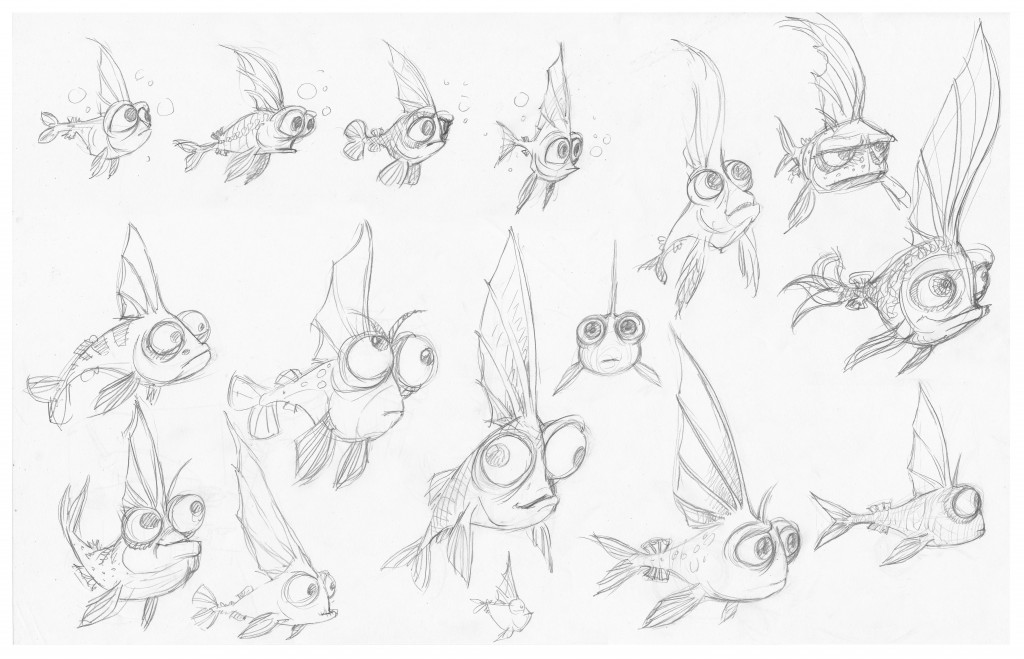 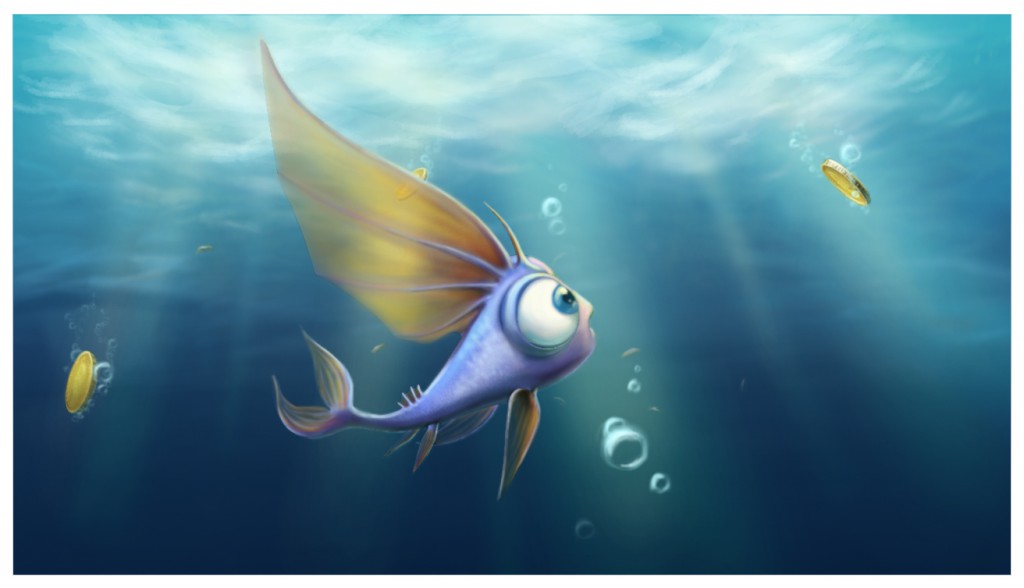 Since the appearance of the first color film, the color palette plays an important role in film production, which is quite understandable as it can give your film a unique look and feel.

As it always happens, artists deliver 3 billion variants, but only 1 or two of them are used in the film. 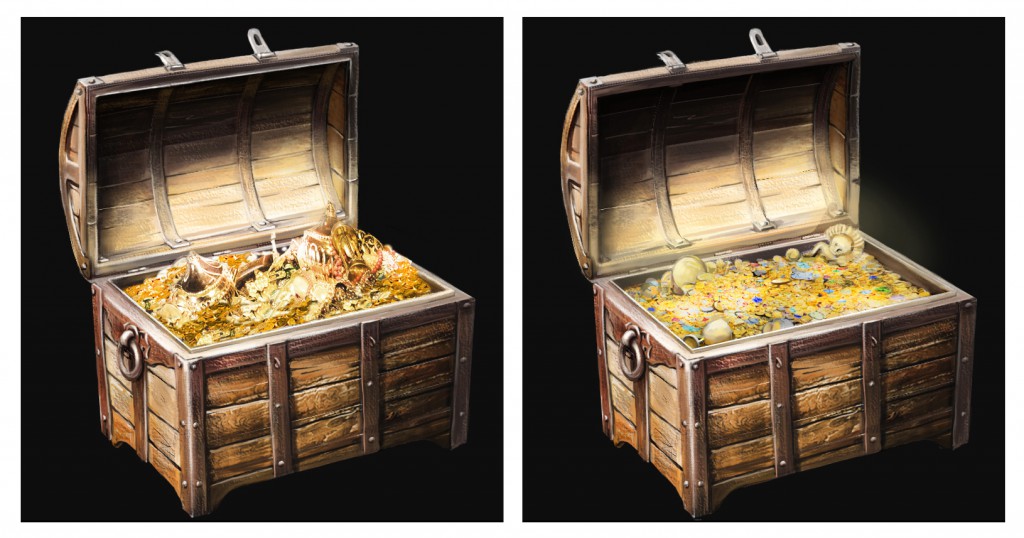 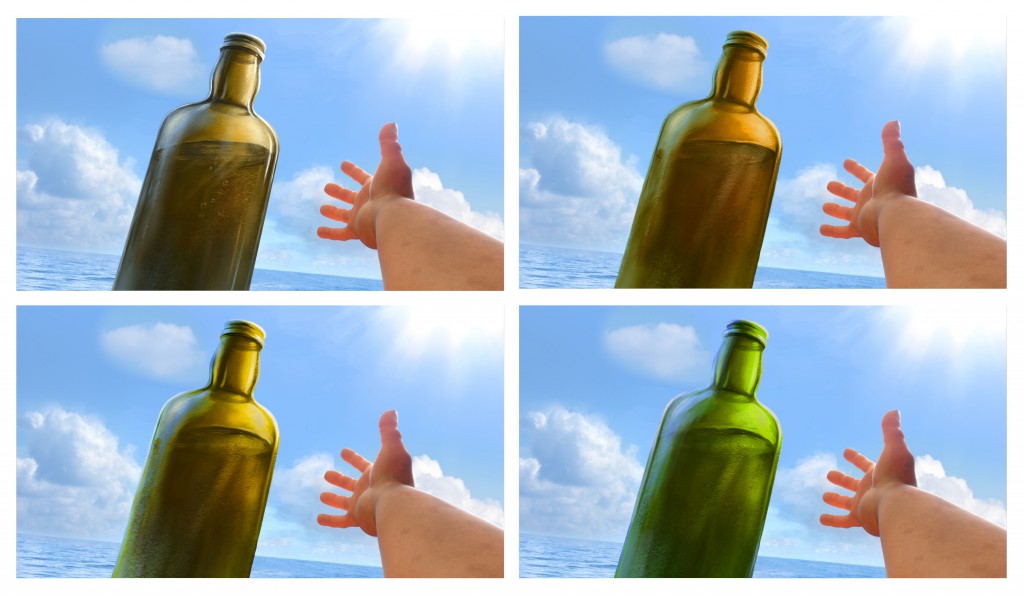 As the saying goes, if sea stars and jellyfish stick to a cloak, there should be a reason for that. In our case, these secondary characters appeared not from the very beginning, but in the process of film production. We tried to include them in the story, it worked out well, so we decided to keep them- a simple scheme which greatly complicates the whole process, but gives positive emotions in the end. 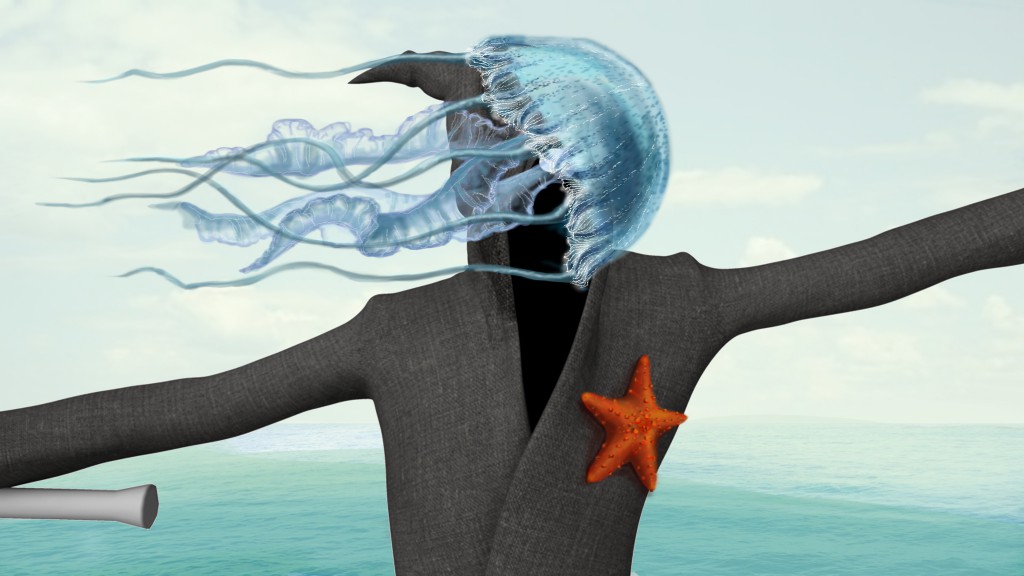 According to our data, any self-respecting raft must include logs, a mast and a sail. As it’s a pirate’s raft, it should also have a corresponding flag. We don’t know how much time it took the pirate to build this raft. But! It took us a pretty long time to draw it.

Our engineers verified every inch of this construction. We made cross-sectional drawings as well as views in three quarter perspective. Eventually, we liked the way it looked and were sure that it could withstand the weight of two passengers. So, we placed our pirate on the raft and started waiting for the guests that would come to visit him.

The creation of clouds became a separate topic of discussion. In our animated film the sky covers 50% of the screen. So, we started searching for the right variant of clouds within and outside Moldova. In search of good references, our director went to the mountains. The clouds were redrawn numerous times, changing from cumulus into cirrus ones. In some versions the sky was overcast, but then it cleared up again. The weather was very unstable.

After long hours of bickering, the right variant was found. The weather settled down and everyone’s mood improved. 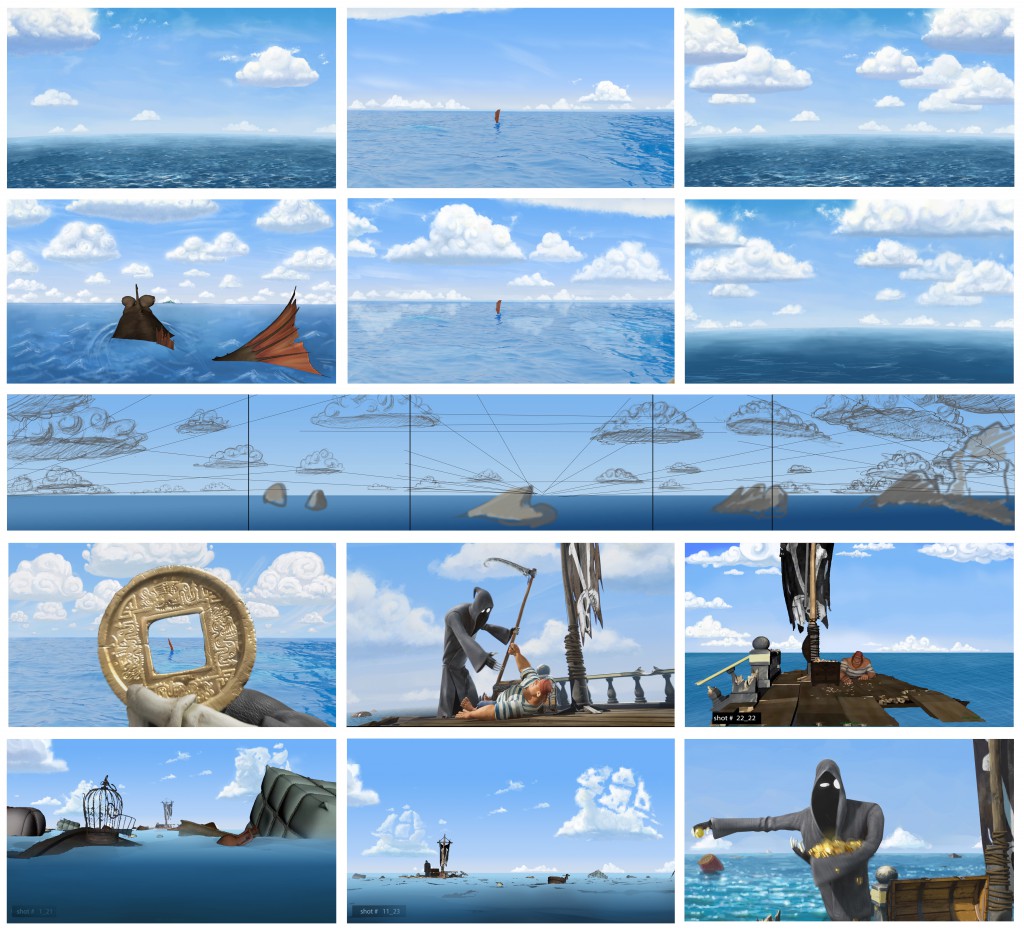 Is it the end? Oh, no. In the next post we’ll tell you about rigging, animation and simulation. This stage was also full of interesting and unexpected things (at least, they were unexpected for us). In other words, the farther you go, the closer you get:)

In the meantime, you can watch the whole film: